Actinic gargles and burps from laboratories,

Their chimneys smoking out lethal heat,

Lashing the winds with acidic whips,

Green enough to melt your meat,

Choke you to the ground, off your feet,

Have you wriggling like a worm on your sheet,

Flying through a maze of Holy steeples,

All set to fold their wings, breathe afresh, then spray decay,

Drop ammunition saved from conquests in the Gulf, coconuts glass-shelled,

To block all your holes,

To unfasten last grips on poles,

Down to the dust, all shall mourn ceasing heart beats,

Will squeeze triggers, summon the scourge,

Join in as martyrs for accolades from Eden, then white celestial fun,

Blood for justice, blood for rebellion,

Carefree of an entire generation slipping into oblivion,

The Demons of Death shall be further, allured,

Unaware of the incoming peril, scientifically planned by the Devil,

On this land that once, shone as Umayyad’s throne, no one might ever get cured,

Toxic bubbles blown into the crowd, out of their tentacles,

Will glaciate your lungs, burn your nipples and rot your testicles,

Boils will grow out of your skin, and then burst,

You’ll cripple, you’ll stumble for your limbs shall crumble,

In a flash, your bones will be powdered; your mettle shall rust,

Laughter shall echo from the President’s chair,

Time for Syrian maids and lads to round up in lines,

To poke out their noses, follow the chemical smell,

Fall into queues to the gateways of Heaven and Hell…

(Based on the possibilities of a chemical touch to the prevailing warfare in Syria. ) 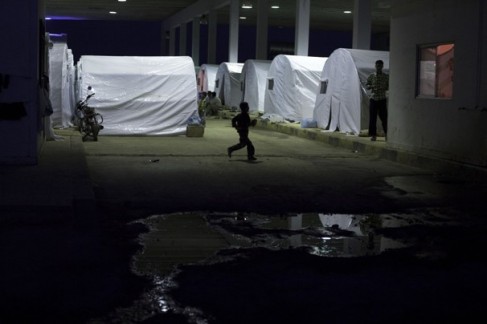 Though scratched and peeved,

Like me it is the only other inheritance of my family,

Our only possession that wasn’t rubbed on to the ground completely,

My grandpa gave it over to my dad,

After a short stint in the Israeli army,

And, since then dad preserved it,

Kids all around the world,

Must have gotten together,

Must be a hell of a time,

To play, to eat, to make merry,

But I don’t want so much,

I know kids in my world are not so lucky,

I don’t want to play,

I’d seen those jet planes that close for the very first time,

Gripped by their power,

Trembling in that macho sound of theirs,

I thought that manly machine attracted me,

But, before I could think anymore,

The ceiling came down on me,

And, soon my pounding heart,

My leg wasn’t there,

I could feel myself only till my knee…

Crushing on my tool in that Turkish refugee camp,

Resting my aching arms and those crutches,

I miss my dream of playing with my brother,

With all of my family dead,

Now I dream no more,

All I want is to ask friends from that happy world out there,

Did they need my leg that badly?

Only a little makes me happy,

I don’t want to play,

(Inspired from Joe Sterling’s CNN article, “Uprooted by Syria’s war: ‘Is there a worse way to live than this?’ “,http://edition.cnn.com/2013/01/14/world/meast/syria-refugees/index.html?hpt=wo_c1)